This mini documentary features the luxurious Burj Al Arab with highlights of some of the greatest moments at this unique 7 star hotel.....

Futronix provided the lighting control system for the most advanced hotel in the world – the Burj Al Arab Hotel in Dubai. With 14,000 dimming circuits in all, the installation is the largest architectural lighting system ever built. Futronix systems control lighting for all of the hotel’s 202 suites, in addition to lighting for corridors, balconies and public areas.

Each suite has one or more Futronix PFX-32 dimming control systems to operate the lighting in every room, with the largest suites having five systems giving a total of 160 channels of lighting. Dimmer racks controlling all the landings are networked together and operated by a custom graphical interface. Many unique automation features requested by the hotel provide increased convenience for guests.

The hotel building has the energy requirements of a small city, and is fitted with back-up generators for emergencies. If the generators are activated, the BMS system sends a signal to the floor controllers, which switch the lighting in each suite to energy saving levels taking into account the levels already selected by the customer.

The Most Exclusive Hotel in the World

The most sophisticated of guests can hardly fail to be awed by this stunning combination of futuristic design and technology with Arabian tradition.
The ‘Arabian Tower’ – the realization of the vision of HH General Sheikh Mohammed bin Rashid Al Maktoum – stands on its own man-made island 280 metres offshore in the surf of the Arabian Gulf. At 321 metres (or 1053 feet) the Burj Al Arab is the world’s tallest hotel.

Two massive arched struts radiating from the central ‘mast’ – joined by a ‘sail’ to create a huge 60-storey atrium within – are studded with spotlights set like jewels in a crown, and washed with coloured exterior lighting in the evenings. The dazzling white ‘sail’ – fabricated of double-skinned Teflon-coated woven glass fibre – is illuminated by 142 floodlights at night, creating a dramatic light show visible for miles.

A Suite with a View

All suites are decorated in nautical blues and yellows, and feature floor-to-ceiling and wall-to-wall windows with sea views, with an entrance hallway with curved staircase leading to bedrooms on the upper level. On the lower level are a dining area, and a fully-equipped

Suite lighting throughout the hotel is controlled by the largest architectural lighting system in the world – supplied by Futronix- providing individual control to all guestrooms at the touch of a button. Bedrooms feature dedicated control panels at both sides of the beds, offering convenient innovations such as ‘trail of light’. When a guest presses a permanently-lit button on the panel the nearest table lamp will fade gently on, along with lights in rooms leading to the bathroom and in the bathroom itself. Table lamps in each room are fitted with Futronix table lamp controllers and operated as part of the scene dimming. The scenes in each room can be selected from the switch panels and, additionally, the table lamp levels can be individually set.

Every suite, regardless of size, is a showpiece of technical excellence. Communications are comprehensive, ranging from fourteen telephones in a 1-bedroom suite to twenty-seven handsets in the two Royal Suites, in addition to internet, private copier and fax in all suites. More than 100 computer controlled channels of cable TV, video on demand, real time recording, surround-sound stereo and large plasma-screen TVs. In-room automation includes surveillance system, curtains and air conditioning, all operated by remote-control.

Each of the two Grand Suites on the 24th level has an entrance reception, with lounge, dining and kitchen areas, an office and two bedrooms on the lower level. Upstairs by elevator is the main bedroom, decorated in royal purple and gold with hand-embroidered wall panels, with adjacent dressing room and bathroom. There is also a second upstairs bedroom with ensuite.

The two Royal Suites on the 25th level are the most luxurious hotel rooms in the world, each complete with private cinema and state-of-the-art lighting controls, audio and visual equipment. A majlis (meeting) area with leopard-print seating is lit by wall-sconce uplighters. Each suite has two lavishly appointed upstairs bedrooms, one featuring a slowly-revolving bed.

A stunning water and fire display at the hotel entrance greets guests before they enter a sumptuously decorated lobby. Designed with a nautical theme throughout, the interior is as opulent as the exterior is dramatic, with fastidious attention to detail in every fixture and furnishing. Granites and marbles, textiles and carpets, artworks and sculptures were produced all over the world exclusively in Arabic themes for the hotel.

Twin escalators alongside a huge coral reef aquarium wall ascend from the lobby to the Mezzanine floor, with a spectacularly illuminated water cascade between them.The Mezzanine level houses the hotel’s exclusive boutiques, as well as the ‘Sahn Eddar’ Atrium Lounge and the ‘Al Iwan’ restaurant.

Here in the ‘Sahn Eddar’ or reception area, the awesome 60 storey atrium dominates, with the blue triangle of the ceiling soaring 180 metres overhead. Guestroom levels ascend in graduated shades of light, fresh colours, with the sweeping curves of the exterior reflected in the walls, columns, balconies and backlit stained-glass panels above the doors to each suite. Combined with carefully designed lighting controlled by Futronix, the atrium design creates an intricate Arabian geometric visual effect viewed from any angle or level.

There is no check-in area – guests are met by a personal guest service manager to complete check-in in privacy and comfort, then escorted to the bank of lifts where some of the fastest elevators in the world deliver guests to their accommodation floor at speeds of up to six metres a second. Once at their suites, guests are greeted by butlers who demonstrate the suite’s sophisticated technology before unpacking the luggage.

Guest reception at each floor is equipped with a Futronix Floor Master Controller – when a guest arrives the receptionist selects the room number and turns all the lighting in the guest’s room to a pre-programmed ‘welcome’ scene. Similarly, when a guest leaves, all lights can be turned off. There is a master panel by the front door of each suite for guests to turn all lighting to a ‘welcome’ scene, or to an ‘exit’ scene that excludes important areas possibly still occupied, such as bedrooms and bathrooms.

Finest in Dining – The Restaurants

Other restaurants in the hotel include the ‘Sahn Eddar’ lounge in the Mezzanine, ‘Al Iwan’ Arabian cuisine restaurant in the Atrium, ‘Babu Al Yam’ – the Sea’s Door – next to the pool and sundeck, and the nearby ‘Juna’ lounge. At the very top of the hotel is ‘Al Muntaha’, an amazing 140-seat restaurant housed in the ‘wing’ across the mast at 200 metres with incredible views extending over the Arabian Gulf and back over Dubai.

On the upper level are aerobics rooms and gyms. Adjacent are the spa boutiques, and the Amphitheatre Lounge with terraced seating and the same decor as the pools. The ‘Diwania’ lounge offers snooker tables and a library well-stocked with the latest books and CDs.

The ‘Al Falak’ Ballroom on the 27th level seats 220 for dinner and up to 400 for cocktails. An unobtrusive but excellent sound system and lighting controlled by computerised technology completes a room suitable for functions of all kinds.

Also located on the 27th level are two boardrooms and two ‘majlis’ or meeting-areas, as well as several conference suites. Both of the boardrooms seat 20, and feature two fully-equipped simultaneous translation booths. All conference and meeting rooms are equipped with the latest computer technology, and with lighting, curtains and air-conditioning operated by remote control.

Futronix are proud to have supplied lighting control systems for this prestigious project.
In use, the Futronix PFX System’s all-digital design has demonstrated the ability to operate with the greatest of long term reliability. The Burj Al Arab is testimony to the flexibility of the PFX-32 system to adapt to the most complex of requirements and meet the highest of standards. 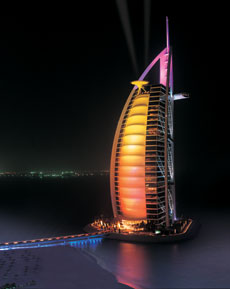 Fit out of all public areas:
Kvaerner Construction in association with Arabtec Hotel Interiors